Morris connection to Shelby and Alexander lineage in Wales

Notes:
a. Alexander is a 'new' last/maiden name for Margaretta Selby. With genealogy research it is always good to periodically check heritage sharing sites to see what others have gleaned through their time, energy, travel, and/or pocketbooks. As of a 3 weeks ago or so, I have not had a maiden name for Margaretta so I was delighted to discover a site listing her as an Alexander.

b. This supplier for information says her parents are Thomas and Lucy Alexander. Thomas born in 1630 in Swaffham Prior, Cambridge, England and died in 1669 in Tregaron, Wales (an ancient market town for its area of Cardiganshire). Lucy is believed to be born about 1635 but otherwise unknown maiden name, birth location, death year, and death location.

e. According to St. Carons Church in Tregaron, the old cemetery stone markers of long ago were removed, so only a general area of the cemetery yard can be attributed for Phillip's and Margaretta's final earthly location. Phillip (1731) outlived his wife (1696).

A recent source on the internet I read for their children attributed a "Rowland Shelby" with an unknown birth year and a death year of 1736 as another child of theirs.

Speculation for a 7 year gap between Elinora and Evan could be due to a miscarriage or stillborn or infant who died shortly after birth but not baptized or listed in church records.


Eleanor Laible Tarmann grew up in Lacon in western Marshall County, IL. Her later years were spent in Graymont to Flanagan to rural Minonk and Dana area for church at Windtown's St. Petri Lutheran Church.

I'm saddened that I didn't hear of her passing until after her service.

Yesterday, February 20, 2018 I had a six month follow-up ultra sound Doppler study of both legs to check for any clots after the saddle PE event in August and I had it scheduled for the OSF St. James hospital facility in Pontiac.  I begged my husband to stop by and take a few photos on our way back to Toluca. Weather was horrible with rain and wind so these pictures were taken from our car.

St. Petri Lutheran Church is east of Minonk, south of Dana, and west of Flanagan to give you sense of where "Windtown" is located. Ironically, there are wind turbines located nearby but 100-170 years ago there were reportedly lots of homes surrounding St. Petri Lutheran Church. The church grounds cover several acres with an old schoolhouse, large 2-story parsonage, beautiful architecture church, cemetery, and a few other small structures.

The church has large signs posted at Route 116 and the north/south country road (I think it is 100 North). From 116, go north 1 mile and as you continue north, the church grounds are on the NW corner as seen in the first photo below. The parsonage and church and then their cemetery are 1/10-2/10 mile more to the north.

Graymont, Eleanor's hometown, is between Flanagan and Pontiac, so from the church you would go south a mile to Route 116 and turn east traveling about 3 miles to Flanagan and continue eastward to Graymont, which is located about 1/2 mile north of Route 116. 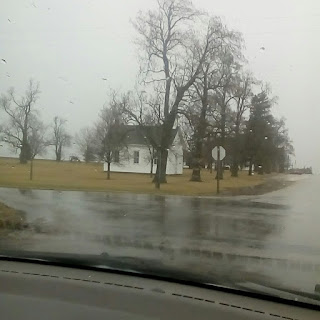 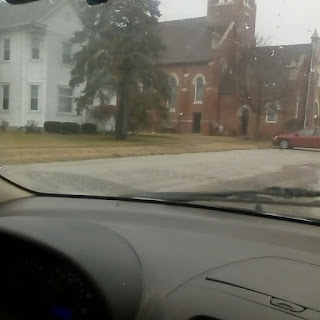 Eleanor's service was held at St. Petri however she's buried at a different cemetery closer to Flanagan.

From the official website for The State of New Jersey:


In 1664 the Dutch lost New Netherlands when the British took control of the land and added it to their colonies. They divided the land in half and gave control to two proprietors: Sir George Carteret (who was in charge of the east side) and Lord John Berkley (who was in charge of the west side). The land was officially named New Jersey after the Isle of Jersey in the English Channel. Carteret had been governor of the Isle of Jersey.
Berkeley and Carteret sold the land at low prices and allowed the settlers to have political and religious freedom. As a result, New Jersey was more ethnically diverse than many other colonies. Primarily a rural society, the colony grew to have about 100,000 people.
Eventually, governing power was transferred back to England. For many years, New Jersey shared a royal governor with New York. The governorship was finally split in 1738 when New Jersey got its own governor, Lewis Morris.


More on Lewis Morris and some about Morrisania, NY:


more from this website for descendants of founders of New Jersey:

The First English Purchase of Land in New Jersey

… son of Henry Chamberlin and Ann West. He married Rebecca Morris, daughter of Col. Lewis Morris and Elizabeth Almy of Passage Point, Monmouth County, … were granted to his widow Rebecca; her brother John Morris was appointed her bondsman.On 21 May 1743, his widow …

… Lewis … Morris … On 25 October 1676, 3840 acres were conveyed to Col. Lewis Morris of Barbados and his associates in the Iron Works at … Manor. Additional property was conveyed in 1681, to Col. Morris of Tinton Manor, for Ramsant’s Point, originally …

… Thomas … Morris … Thomas Morris, a Puritan, was born in England, time and place still … it probably was in Massachusetts about 1639. He died at Morris Cove in New Haven, Connecticut, 21 July 1673 and his …

… Thomas … Morris … There is no biography available for this Founder. …

… Lewis … Morris of Newark … There is no biography available for this …

Posted by Becca Sadler at 1:08 PM No comments: Constance "Daisy" Morris Glick was one of my great-grandfather's sisters

Dr. and Mrs. Glick lived in Metcalf, IL for several years before moving to Kentland, IN. They spent the bulk of their adult years living and working in Kentland. Their graves are in the Fairlawn cemetery which is located about 3/4 mile or so south of Kentland and about 1/3 mile west of Indiana Route 41. A narrow strip of grass next to the country road makes this marker easy to locate.

Constance Elizabeth Morris Glick was born on June 9, 1875 and died on August 27, 1966 at 91 years of age. She and Doctor Orval Glick were married on April 24, 1900 and had about 49 years together. Constance attended De Pauw University and taught before getting married. During the years in Kentland, she belonged and was active in many church and civic organizations: Kentland Presbyterian Church and its women's association, Kentland chapter of DAR, Kentland Library board, Kentland Reading Club, and Kentland Woman's Club.

Constance and Orval had 2 children: Horace Maxwell (Max) Glick and Margaret Glick Stevens. Both of their children and their spouses spent the bulk of their adult years in nearby Remington, IN and are buried in the Remington cemetery. (Remington is about 15 miles east of Kentland. Both communities are along Route 24.

Orval Everett Glick was born on November 19, 1873 in Metcalf, IL and died on August 25, 1949 at 76 years of age. Dr. Glick was also very active in each community besides his doctoring belonging to Kentland Presbyterian Church, Kentland Masonic Lodge, the Modern Woodmen, the American Medical Association, the Indiana State Medical Association, the Newton County (IN) Medical Society, and as a medical examiner for selective service during WWI and WWII.

Posted by Becca Sadler at 11:14 PM No comments:

Continue zig-zagging back and forth on my mother's father's ancestry

Yesterday's posting gives my connections for 8 generations (!) that goes back and forth from maternal to paternal sides of the family tree for my mother's father's ancestry.

Rising Sun, IN is a delightful small county seat community along the Ohio River. Last weekend the county historical museum hosted a quilt festival. I haven't gleaned much information on the Ricketts family like how many children did Robert and Susanna Wilson Ricketts have. However, I did come across an email inquiry copy that was part of the Ricketts family file at the Ohio County Historical Museum. This email wanted to verify Robert Ricketts as Nathan Ricketts' nephew.

Why would an uncle and nephew relocate to Indiana from Pennsylvania and Maryland (where Robert was born)? I don't have proof but with the recorded military experience on their grave markers, I'm assuming as a "reward" for their service they were given frontier land to settle. It will be interesting to try finding documentation to support this. 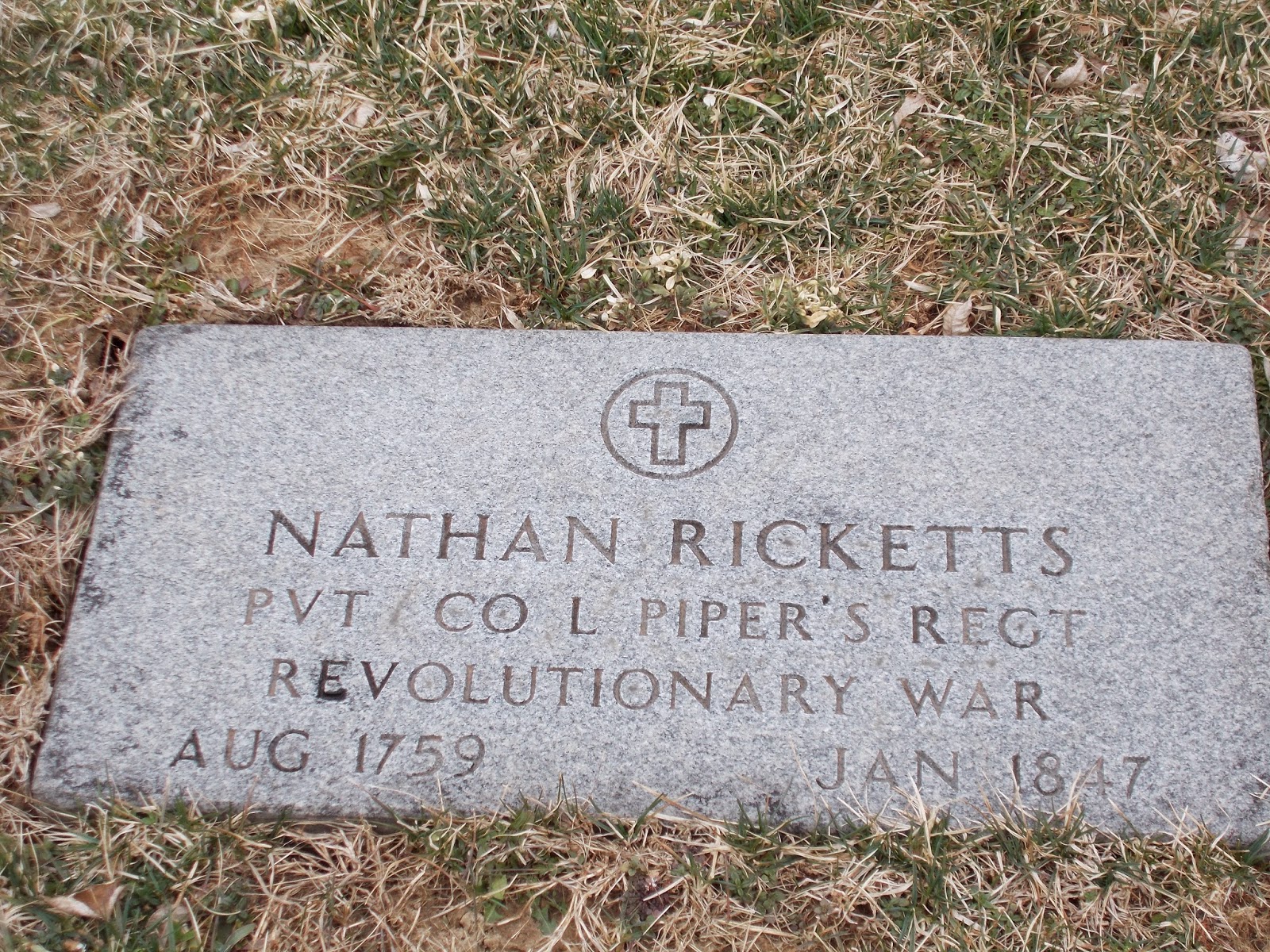 Nathan was only about 5 1/2 years older than Robert.

Susanna's barely discernable stone will be shared in an upcoming blog post.

Posted by Becca Sadler at 8:54 PM No comments:

Laible Connection to Moultons and Ricketts

This past Thursday afternoon, my husband and I located the graveyard and markers for #8--my 5th great grandparents!!!!

Robert and Susanna (or Susannah) Ricketts were both born in Maryland according to other researchers. I don't know yet how or when they married but they were in Dearborn County, IN when Vienna was born in 1809. Dearborn County was divided shortly after that and Rising Sun became the county seat for Ohio County.

About 7 1/2 miles NW of Rising Sun was where my husband and I found the Mt. Carmel Cemetery along Indiana Route 56. This is in Cass Township.

What I didn't know until I went to the Ohio County Historical Museum and the Mt. Carmel Cemetery was that Robert Ricketts had served in the Revolutionary War. I also didn't know that his uncle, Nathan Ricketts, also served and is buried next to Robert. Due to their military service, some one or group (possibly DAR or SAR) have replaced their old stones with new markers indicating their military units.

Susanna's marker has not been replaced and by the photos her first and last name are barely noticeable. 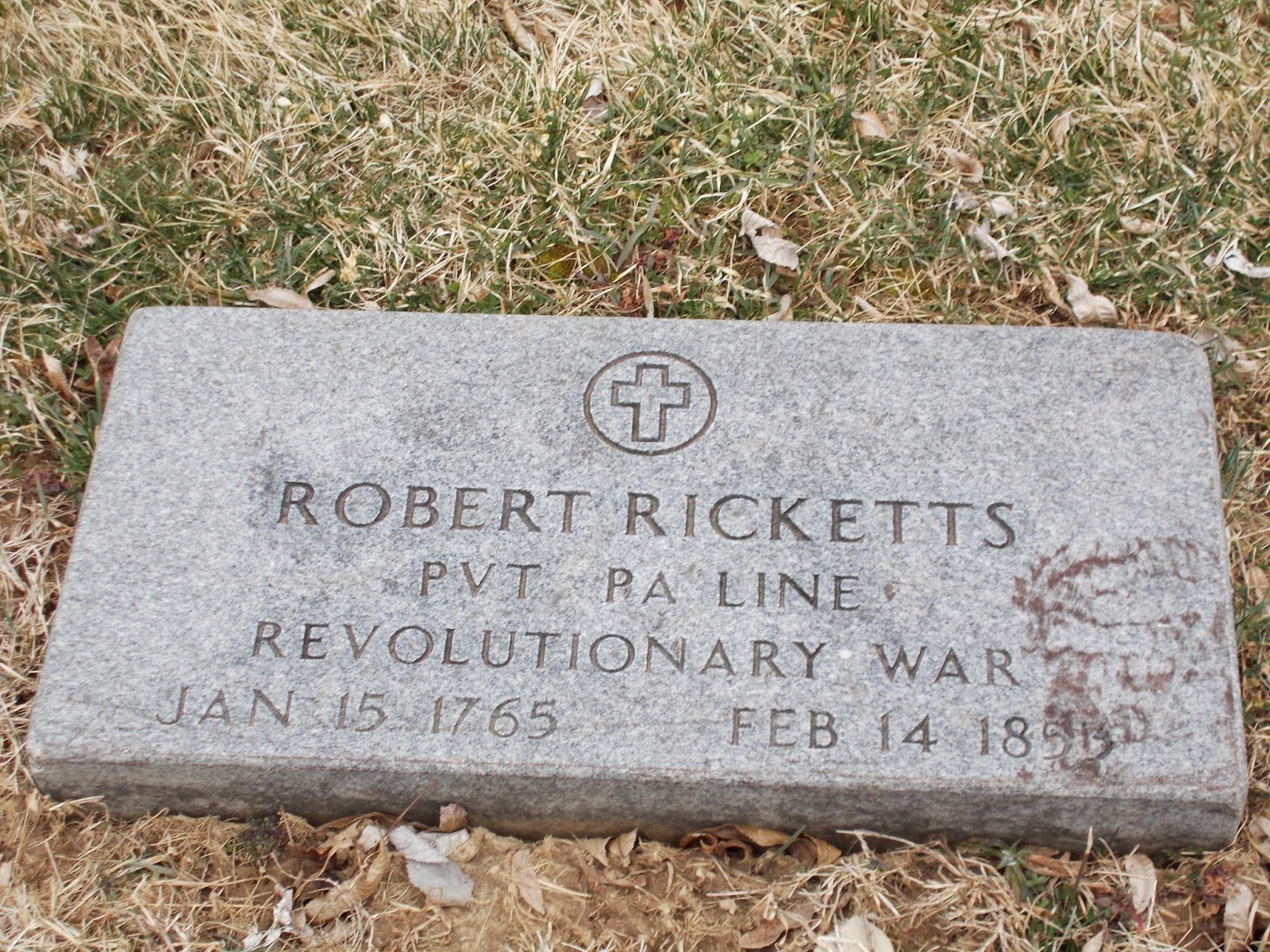 I'm having trouble loading the other photos, so I will end this posting and try posting Nathan's and Susanna's later.
Posted by Becca Sadler at 10:52 PM No comments:

I will repeat the first 2 children mentioned in the last blog (had some kind of error on page that prevented me from completing the list of children).

Becca Sadler
Welcome! I'm living, crafting, and teaching in the heartland of America with these passions close to my soul.